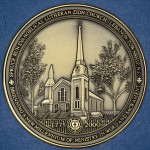 Designed by the Reverend Dr. Frederick Schumacher and the Reverend Gary V. Ettlemyer for the celebration of the congregation’s 225th anniversary, the medal emphasizes the congregation’s local history as well as its strong Lutheran roots. On the obverse side, Luther’s Rose appears between the year the congregation was established and the year of its 225th anniversary as it begins the new millennium. Pastor Ettlemyer chose the Jerusalem Cross as the symbol for his Ordination, and it is used to separate wording on both sides of the medal. The reverse is from a wood cut depicting Blessed Dr. Martin Luther holding the consecrated host and Philip Melanchthon holding the common cup as they distribute Holy Communion. The quote is from a sermon based on St. John 15:5 by Luther. Pastor Schumacher’s initials are located at the five o’clock position on that side.

Originally offered in a limited, numbered edition in fine sterling silver, as well as gold and silver plate, bronze, and brass, the medal is included in several notable collections of Luther medal memorabilia in the United States and in Germany. It is among Lutheran memorabilia dating back to the sixteenth century.