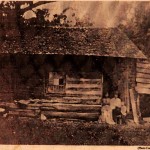 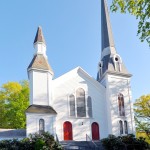 A Church with Roots

The congregation known as Spruce Run Evangelical Lutheran Zion Church was organized in 1774 by thirteen members who worshiped in the barn of Frederick Fritts in the summer, and in his home during the winter.  The church’s first pastor was Reverend William Graff who began serving the congregation in 1774. His formal call as Pastor began in July 1775, predating the American Revolution. Pastor Graff served the congregation from 1774 to 1800. Through the years twenty-two pastors have served the good people of Spruce Run, although the total number of pastorates is twenty-three. One pastor, Reverend Steven Traver served from 1900-1905 and 1927-1947. Our present pastor, the Reverend Chris Halverson, began his pastorate in November 2020.

The first church building in Spruce Run was built in 1800. Of frame construction from yellow poplar, the church was known as the “red church.” In 1835 a stone church was built to the left of the old frame church, and the original building was moved to Califon where it served as a store until a fire destroyed it. The church grew through the years to the point that a new building was needed. The cornerstone for the new church was laid on July 30, 1870, and on March 9, 1871 the church was dedicated. The total cost of construction was $15,000, including a large basement and Sunday School.

In 1907 sheds were built across the road to shelter the churchgoers’ horses. From 1927 to 1947 many changes were made, including moving the horse sheds to behind the church where they remain today. Memorial windows, electric lights and a new furnace made the church a welcoming place for all worshipers. A very special chandelier fashioned out of several kerosene lanterns that have been electrified is located in the nave of the church. In the 1950s a one-room Sunday School was erected, including indoor facilities. The most recent construction completed in the 1980s consists of a lounge, church offices, and Sunday School. We are happy to say that we are still worshiping in that building to this day!

By God’s grace our congregation is 247 years young. Our church family consists of families and individuals of all ages who rejoice in sharing Christ’s love with others.

Also to be noted is the original cemetery belonging to the church. Located across the road, it is surrounded by an iron fence with an entrance gate featuring the sign, “God’s Acre,” at the top. The stones for the walls came from the old stone church. It is the oldest church cemetery in Lebanon Township. A second cemetery was started in 1896 next to the church. Although it is not directly operated by the congregation, it has been served by six generations of gravediggers related to the Lomerson family.